The Tecno K7 is one of the releases by Hong Kong-based phone manufacturer, Transsion Holdings, in the “Spark series”. The Tecno K7 was launched alongside its sibling, the Tecno K9, and they’re absolutely gorgeous.

Designed to be an entry-level smartphone, the device is specifically for phone enthusiasts who want to enjoy premium features at an affordable price. Going by its specs, we have to admit that the Tecno K7 price in Nigeria is not outrageous which makes it a great phone to consider if you’re on a budget.

But if you’re reading this post, it’s likely that you want to know all you can about the smartphone as well as what we think about it. Keep reading to know what excites us about the device and the areas where we were disappointed. 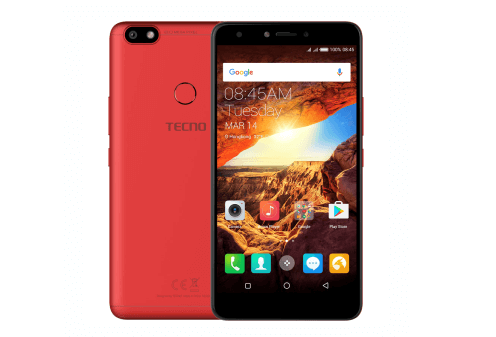 However, purchasing the phone online can cost a little more. The price of the Tecno K7 in Nigeria is dependent on a variety of factors such as foreign exchange, the location of purchase, period of purchase, discounts etc.

For a start, it’s obvious Tecno adopted the design of the Apple iPhone 7 plus and the OnePlus 5 for the Tecno K7. The phone comes with bezels on the right and on the left that makes it look beautiful while the upper and lower bezels make the smartphone look bigger than it really is. The navigation buttons are located just below the display and are all onscreen buttons while the 5MP camera and speaker grille are positioned at the top of device. The right side hosts the power button and the volume rocker while the left side is plain.

The rear of the phone looks simple and elegant with the camera blending nicely into the design. The LED flashlight is positioned just beside the camera while the fingerprint scanner sits below the shooter. Going further, the smartphone rocks the Tecno logo which is emblazoned just below the fingerprint scanner. The back of the smartphone is made of plastic even though it looks like a metallic rear, which is actually cool because it gives the Tecno K7 a premium look.

You can gift yourself or your loved ones with a unit of the smartphone in any of the following colour variants namely: Phantom Black, Metallic Red, Champagne Gold and Coral Blue colours.

The Tecno K7 sports a 5.5 inches HD IPS display with a resolution of 720 x 1080 pixels. Compared with the Tecno K9, we didn’t have issues experience issues with the display output of the Tecno K7 because of its density of 267 pixels per inch and its screen size. The colour reproduction and the contrast looked okay which is similar to what its contenders in the entry-level category offered.

We also used the smartphone under direct sunlight and the brightness wasn’t a problem, although you may need to tilt the phone here and there to ensure continuous smooth usage. The adaptive brightness mode can come handy when you’re outdoors as the ambient light sensor is very sensitive. Additionally, the Tecno K7 uses a 2.5D curved glass for its screen protection against scratches. In all, the display on this smartphone looks good for its price.

The Tecno K7 is powered by a non-removable 3,000mAh battery unit which is at par with other devices in the category. You’re unlikely to have issues with the battery capacity due to the processor which does its best at conserving power. A heavy user may need to go out with a charger to top up the phone when it goes down. We consider heavy usage to include watching videos, playing games or surfing the internet while raising the brightness level. But if you’re a moderate user, you can expect to go through the whole day without plugging your device to power.

The problem with the battery department is that the smartphone charges too slowly for our liking. The Tecno K7 doesn’t have a fast charging tech which means you will need to wait for about 3-4 hours for your phone to top up from 0 to 100 percent. The charger also gets warm during the charging just as the phone gets hot during heavy usage.

The camera set up of the Tecno K7 outperforms many of its contenders in the midrange category and we must admit that we’re impressed by it. The rear camera sports a 13MP shooter with face detection, autofocus and HDR features. To support the camera is a flashlight so you can take clear images even in low light conditions. However, the LED flashlight was not as bright as we expected which affects the quality of the shots.

Turning to the selfie camera, what you will see is a 5MP shooter with its LED flashlight which is helpful for capturing bright images. Based on the shots we got while using the camera of the device, the camera is far more okay than what you can capture using other devices. If the Tecno K7 ever needs improvement in the camera department, it has to be with the rear camera which can give better shots than it currently does.

Under the hood, the MediaTek MT6580 which clocks at 1.3GHz runs the entire tasks of the smartphone with the support of its 1GB (and/or 2GB) of RAM. The chipset is one of the old processors which were used as far back as 2013 but no longer has a place today where there are more efficient processors. Its performance doesn’t wow us as the power management is not better than what is obtainable in its contenders.

But the performance in handling tasks is dependent on which of the variant you buy: the 1GB or 2GB variant. The 2GB variant of the Tecno K7 didn’t give any issues with playing heavy games even though we feel it can do better like the Infinix Hot 5.

The Tecno K9 is one of the few entry-level smartphones to come with a fingerprint scanner which can record up to 5 fingers. Additionally, you can also use the scanner for call control as well as online payment.

The Tecno Spark K7 is a smartphone that impressed us a great deal even though it a midrange phone. It offers an acceptable battery performance, responsive fingerprint scanner, a premium built quality and a good selfie camera. As a plus, the smartphone is pocket-friendly and you can easily use it with one hand. Going by everything we experienced during our review, we think the Tecno K7 is a fantastic device to buy.

Prices of Tecno Phones in Nigeria