While the days of its reign as the market leader may seem gone, Nokia is steadily making efforts to worm its way into the heart of smartphone enthusiasts. Nokia 7 Plus is one of such efforts at delivering value to people who are looking get a midrange device.

Are you looking to get a midrange smartphone that comes with specs and feel? Consider the Nokia 7 Plus price in Nigeria and you will discover it’s not overboard. Plus, the specs are surprisingly better than we expected for a smartphone in that price range. 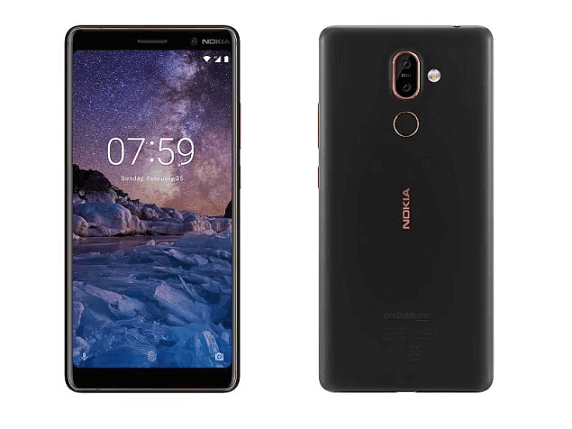 Nokia 7 Plus Price in Nigeria

The Nokia 7 sells for between N95,000 and N115,000 in leading phone stores in the country. The price may be slightly higher on e-commerce stores but it’s a great option to consider if you want to purchase the device from the comfort of your home or office. However, keep in mind that prices are subject to change based on factors like exchange rate, location, the period of purchase among others.

If you’ve used the predecessors of the Nokia 7 Plus, you will likely appreciate the new look of the smartphone which conforms to the standard design language in the world. First, the smartphone features a new 18:9 aspect ratio which is the new premium aesthetics. Then, it comes with the design that’s the current trend which includes: rounded edges, rear-mounted fingerprint scanners and few physical buttons.

According to the company, the sturdy back of the smartphone is the made from a single block of 6000 series aluminium, giving it a good feel in the hands. The fingerprint scanner is placed just below the camera where your fingers can easily reach them – and it can also pick up greasy fingerprints.

Still on the back of the smartphone, there’s the Nokia logo printed in copper. In fact, the whole frame of the Nokia 7 Plus features copper, both on the black and white colour variants of the model. On the right-hand side of the smartphone are the power and volume buttons while the SIM card tray (with the space for the microSD card) is on the left-hand side. On the top is the 3.5mm headphone jack while the bottom features the USB port, microphone and a single speaker.

The Nokia 7 Plus is available for purchase in only two colour variants: black/copper and white/copper. While copper is an integral part of the design of the smartphone, chances are that the black variants might sell out faster since many people love the black colour.

With an 18:9 aspect ratio display, the smartphone features lower bezels to accommodate it. The aspect ratio makes it easy for the display to fit your palm, making it easy to navigate. What’s more, you also get an immersive platform for mobile movie watching since the display measures up to 6.0 inches. It also sports a resolution of 1080 x 2160 pixels which makes it sharp if you’re making the judgement from a midrange perspective.

However, despite its high resolution which you will notice by the detailed colours it present, the display uses an LCD screen which can be quite easy to differentiate from an AMOLED one. It’s quite difficult to use the smartphone when you’re outdoors, especially if you plan to use it under direct sunlight. Going further, the screen is protected by Corning Gorilla Glass 3 to protect it from scratches and mark. Since this model was released in 2018, we expected it to use the new Gorilla Glass 5 which is the trend for the year, but then, the screen protection isn’t entirely bad either.

The Nokia 7 Plus features an impressive 3,800mAh battery supplying power to the phone. You might think this is a mean feat until you consider that even the Samsung Galaxy S9 Plus packs a 5,500mAh power cell. Adding to the battery cell is a chipset that’s less hungry which conserves the battery juice so you can use the smartphone all day.

The Nokia 7 Plus delivers up to 19 hours talk time, confirming our assertion that the smartphone boasts an impressive stamina for a midrange phone. And to top it all, the device supports quick charging to help you top your phone up in no time. However, there’s no wireless charging feature on the smartphone. But in all, the battery performance of the Nokia 7 Plus is excellent and counts as one of the top reasons to get this smartphone.

Interestingly, the Nokia 7 Plus features the same type of camera you will find in its high-end flagship, Nokia 8 Sirocco. What this implies is that is the camera has the bothie feature, live bokeh mode and the 2x optical zoom with Zeiss lens on board. The main camera has a 12MP sensor and an extra 13MP lens with f/1.75 and f/2.6 aperture respectively.

Translating all these into simple language, you can expect to enjoy high image quality from the Nokia 7 Plus which you can hardly find in its competitors in the same price range. While the image quality is not the best you can get out there, it’s an acceptable standard for mid-range devices. Impressively, the smartphone can also record 4K videos as well as time-lapse and slow-motion clips.

The Nokia 7 Plus features a midrange Qualcomm SoC that gives a performance we consider to be smooth. The octa-core Qualcomm SDM660 Snapdragon 660 is the chipset that calls the shots and it clocks at 2.2GHZ with the support of the 4GB RAM.

Although the 660 might not be the best chipset, the absence of bloatware and custom skin on the Nokia 7 makes the smartphone incredibly fast. The processor delivers an excellent performance but tends to stutter when there are too many tasks taking place in the background.

The Nokia 7 Plus comes with the Smart Lock feature that makes it possible to unlock the phone with your voice. It also has a spatial audio recording feature that uses 3 high-quality microphones to capture audio clearly.

Nevertheless, the smartphone packs an array of impressive specs that any phone enthusiast will find satisfactory – or more than that. If you’re on a limited budget but still want to get a device with premium features, the Nokia 7 Plus is a perfect choice!

See Prices of Other Nokia Phones in Nigeria