Many people do not know that the National Open University of Nigeria was established on July 22nd of 1983. Unfortunately, it was suspended by the Buhari administration during his military era a year later in 1984. It took about 17 years for it to be reopened, and it was former President Olusegun Obasanjo that reopened the institution in April 2001. It was no surprise that immediately after his second term, he approached the university for a certain degree programme. Yes, you read right. Obasanjo is an alumnus of the university.

NOUN, as it is fondly called, is a Federal Open and Distance Learning (ODL) institution. When it was open, it was the only one of its kind in the entire West African sub-region. It is accorded the title of being Nigeria’s largest tertiary institution in terms of student numbers and spread. It is the only university in Nigeria that has an out campus in almost every state of the federation, including the Federal Capital Territory. At take off alone in 2001, student enrollment was 32,400.

Between that time and 2011, the student population had increased to 57,759, and that was seven years ago. Today, that number has far surpassed 100,000. At the tine, the University operated from its administrative headquarters in urban Victoria Island area of Lagos state. Then in 2016, the headquarters was moved by ten Vice Chancellor, Prof. Vincent Tenebe. With 75 study centers scattered across the nation and 50 programmes in its stead, it is difficult to deny the influence the university has had on the Nigerian educational system. 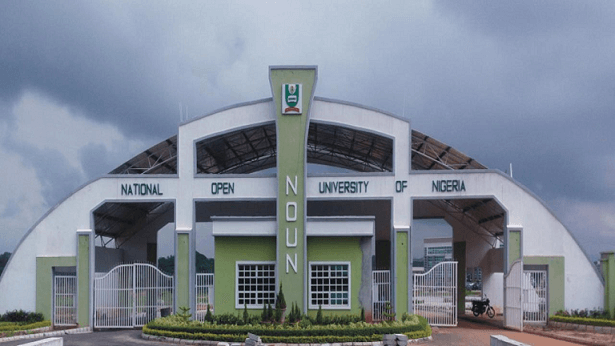 The University is what you can refer to as Convenience Schooling, allowing professionals and gainfully employed people to also study with a properly structured calendar prepared by the school. Plus, all the courses that are offered by the university have been duly accredited by the regulatory body, National Universities Commission (NUC).

The following fees are the newly announced fees by the Vice Chancellor. The information here is verifiable as it is directly from the Institution’s information resource center. The fees are spread into those for New Undergraduate students and returning students, as well as those for postgraduate students such as Masters degree and PHD.

It is important to note that all these compulsory fees should not be paid through inter-bank transfers. Furthermore, unlike most government owned universities and other tertiary institutions where students pay tuition fees annually, NOUN students are charged per semester. However, for a school system as convenient as it is, the fees are relatively low compared to what should be expected.

Things you should know about NOUN

When Shehu Shagari, Nigeria’s first Civilian president established the institution in 1983, the dream was to create a platform that could cater for hardworking professionals and employees that conventional universities cannot cater for. Apart from that, NOUN, has the capacity to admit students in their hundreds of thousands without scrambling for space. A new iLearn system has just been introduced; a system that actually informed the fees review according to the Vice Chancellor. It is expected to make learning easy and more convenient for its students.

Another amazing thing about the University is the fact that you don’t have to be domiciled anywhere just because you want to attend a particular tertiary institution. NOUN gives you the flexibility to move around Nigeria and still be a student. Where you are going to be away for many years, you can ask to be transferred to that state and it is quite easy to do. Indeed, this is one tertiary institution that is bridging the gap and filling an educational vacuum that has existed for many years. It is keeping thousands of Nigerians in school and at their jobs as well.

NOUN is not like the conventional university in Nigeria where all students have to attend classes to receive lectures from instructors. The idea is to make learning a distant activity; usually online where you will access your study materials, engage in tests and so on. It is meant to allow those who work to be able to worm and learn in their pursuit for academic qualifications and so on. Of truth, NOUN has been an immense success over the years, helping Nigerians actualize their scholarly dreams in the most convenient way possible.

With the recent news that graduates of NOUN can now engage in the one-year National Youth Service Programme, there is definitely going to be a boost to its population and impact.